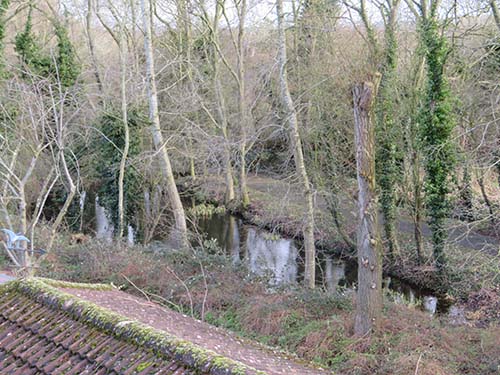 A view from roof level of the Stonehill Pond and spinney taken on the last day of January 2018.  The previous November, TMAEG volunteers cleared leaves and other ‘tree litter’ from the bed of the pond.  Remarkably, only one item of ‘human litter’, a single can, was found, a sign that the pond is once again a cherished community facility. 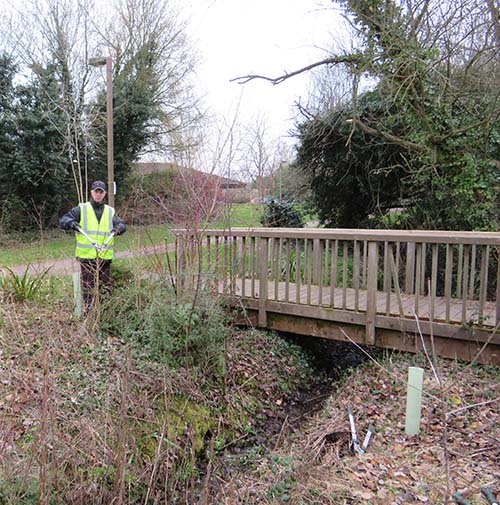 Winter season management of the Ash Brook corridor which crosses Two Mile Ash from west to east.  We seek to keep the brambles under control and look after the many native trees and wildflowers that we’ve planted over the years. 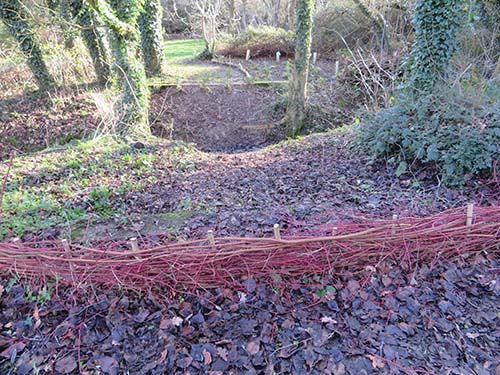 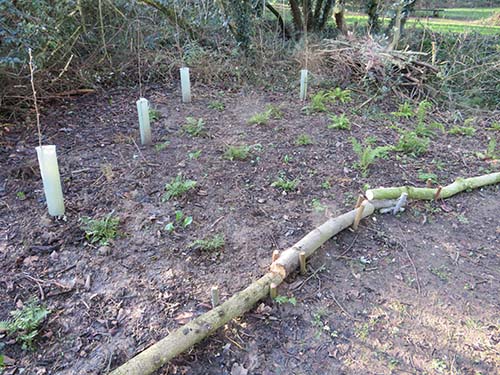 If you follow the path from Stonehill, past the pond, you’ll soon reach the bee garden and the new fernery. In the upper picture, there is a viewing point for the fernery bounded by a low woven dogwood fence;  the ferns lie in the distance on the far bank of the Ash Brook. The lower picture shows some of the newly planted ferns. 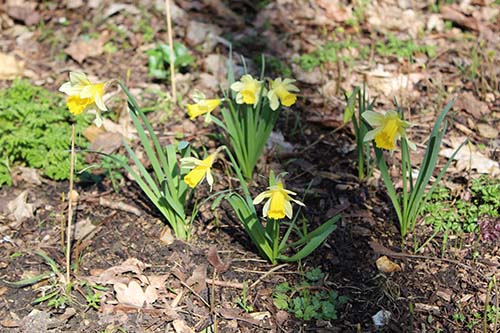 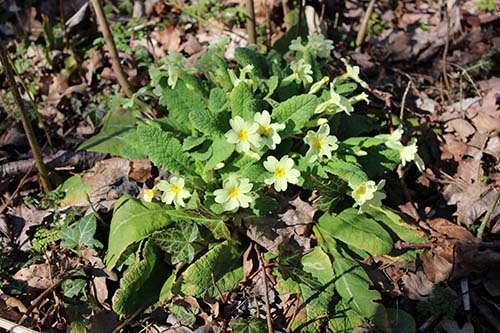 Native primroses are prolific in this area; they are one of the main signs of spring. 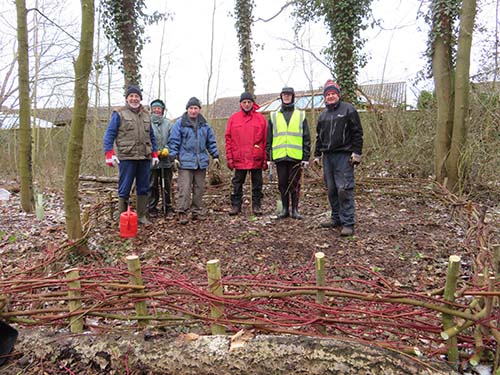 In the middle of March, TMAEG worked on its second glade, defining it with a low dogwood fence and planting many more native primroses to enhance this part of the woodland. 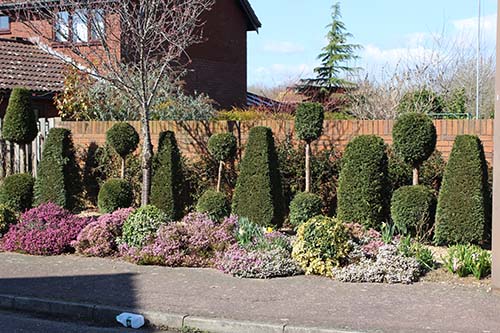 An early spring sight in Thorncliffe, the work of one of our open gardeners, Stan.  A fine combination of topiary, bulbs and heathers in flower. 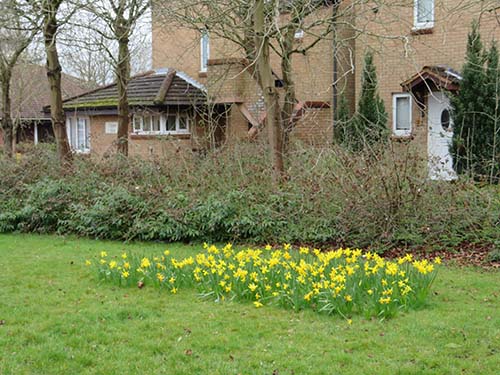 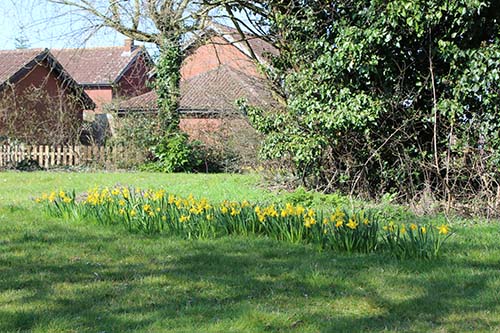 Bulb Displays in our Village Centre 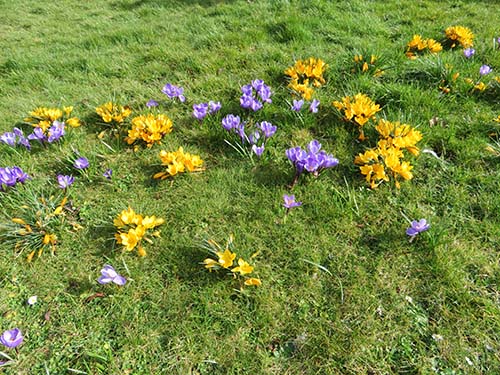 The wonderful purple and yellow crocuses that have adorned the green opposite Ashbrook School for at least three decades. 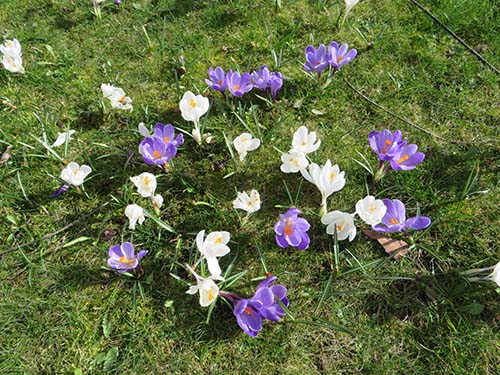 Crocus planting by TMAEG at the opposite end of the green, under the silver maples.  This is the second season for these bulbs. 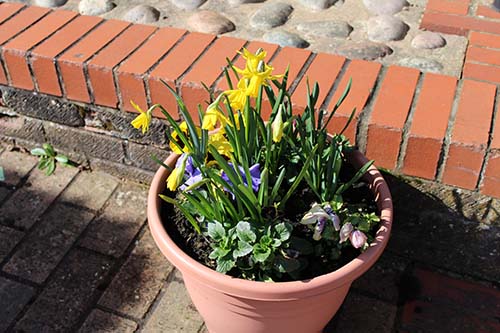 One of 12 tubs planted up and maintained by TMAEG on the forecourt of Ashbrook School. 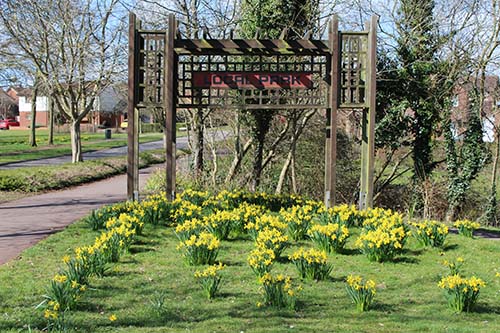 Daffodil planting at the Local Park entrance.  These February Gold bulbs (above) were planted in 2011 by Ashbrook School children at the start of an annual programme run by TMAEG in conjunction with the school. 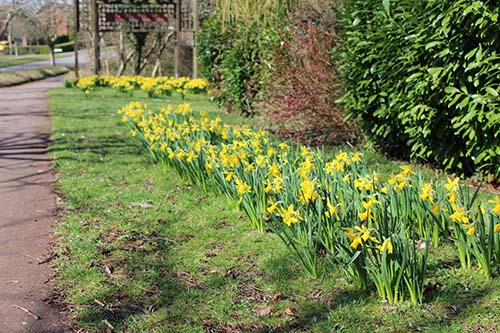 The picture above shows the most recent planting (foreground) carried out in the autumns of 2016 and 2017.  Each entry level child plants three bulbs. 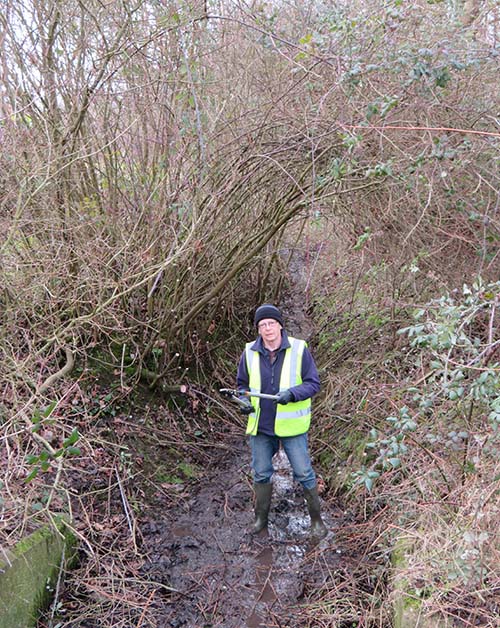 In mid February TMAEG tackled this badly overgrown section of the Ash Brook.  Masses of brambles and dead branches were removed’ opening up views of the stream. 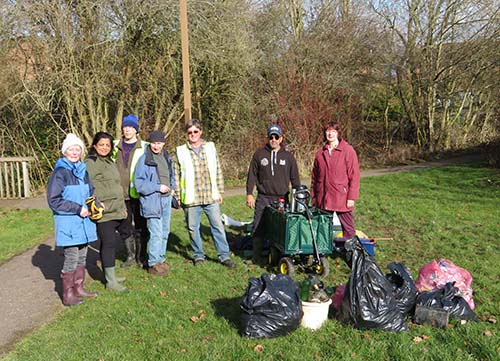 At the same time, tree maintenance was carried out and the accumulated litter of many years was collected by our busy team. The morning’s ‘haul’ was 17 pink and black sacks of waste and recyclable materials. 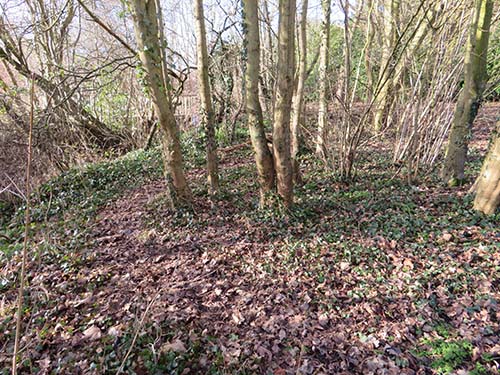 The morning’s work provided a reminder that we have a lovely woodland resource here, a place to walk and play. 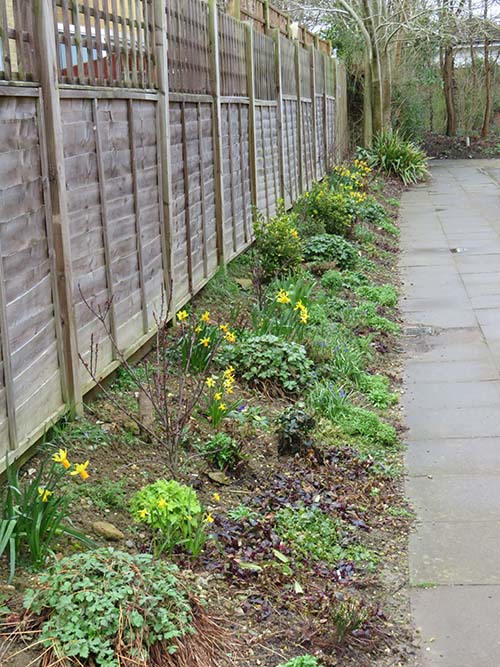 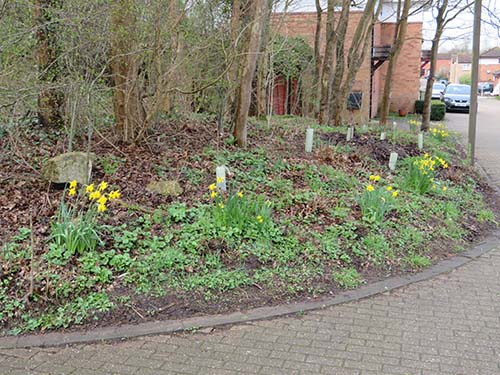 There has been great support from local residents and from passers by for the now well established Kepwick Garden that has transformed a strip of uncared for  ‘leftover land’ alongside a footpath link to Capian Walk into a beautiful amenity for Two Mile Ash. Thanks to the garden and the associated environmental work along the adjacent woodland edge (photo on right), this footpath route has become a more attractive option for east to west walking journeys to and from Great Holm. 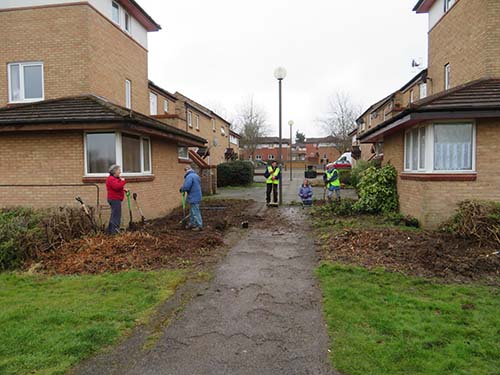 A second community garden is currently being created in the Park Gateway area.  With the agreement of the landowners concerned, the local authority and the occupants of the two housing units, the outworn shrubs have been removed and a start has been made on planting these with colourful shrubs.  The two facing strips of land will be laid out in the same way, matching the symmetry of the original Park Gateway design – hence the ‘Twin Gardens’. The photo shows the preparatory work about half way through.

The Bee Garden and Fernery 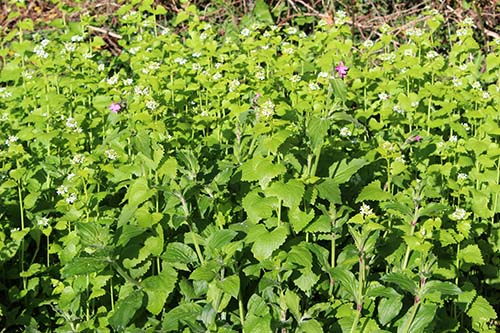 Now into its third year the bee garden is coming into its own with the pollinator attracting plants from seeds sown by TMAEG now taking over.  Here are two of these species, garlic mustard and red campion. 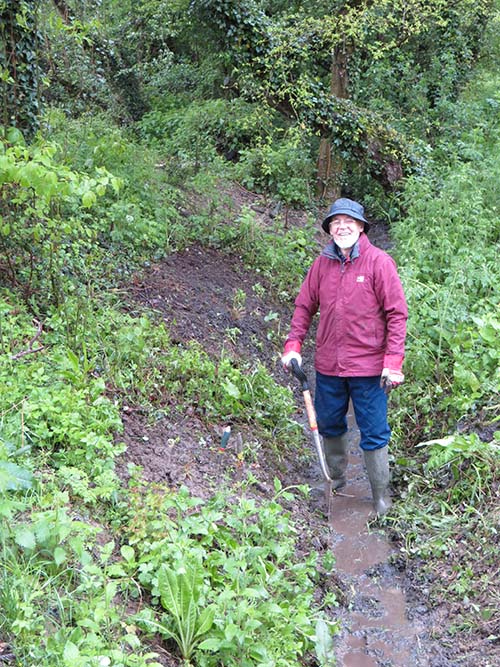 In the latest stage of our work we have planted some 120 plug plants.  These are of two types. Slightly over half of them have been put in place on the eastern bank of the Ash Brook; they include ox-eye daisy, greater knapweed and agrimony.  The others have been planted in three areas on the sides and ‘floor’ of the brook (adjacent photo) ; they are ‘marginals’ suited to stream side conditions and include marsh  marigold, purple loosestrife and ragged robin. All of these plants are either bee or other pollinator friendly. 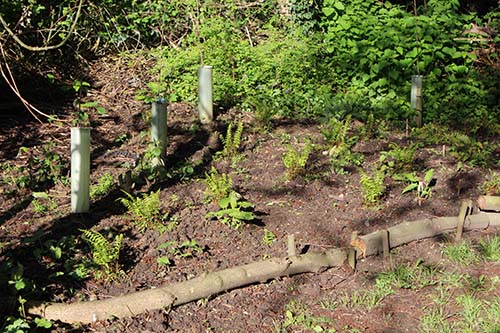 Part of the fernery area which includes three species of fern.  The area is bounded by hazel trees – to be coppiced in future years – and traditional ‘cottage style’ foxgloves are also to be planted.

Beauty in the Street Scene 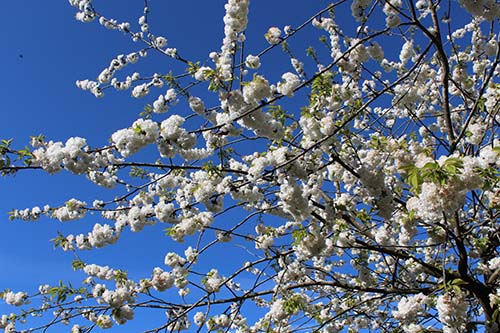 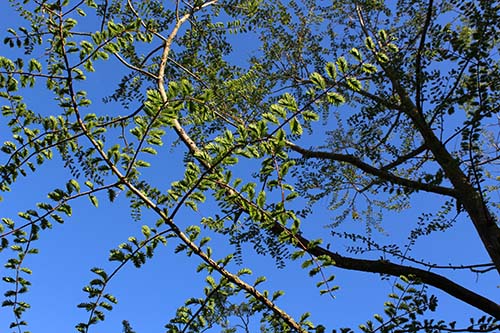