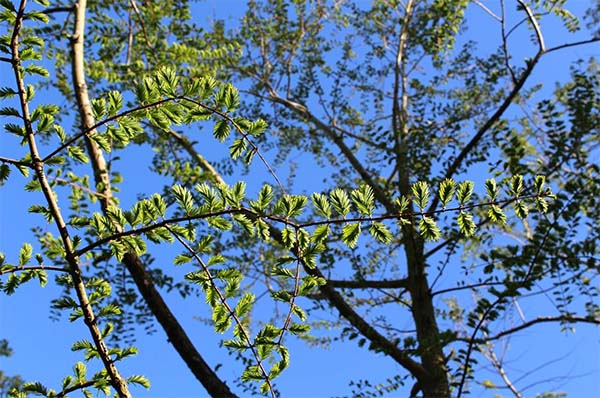 These are the highly distinctive branches and leaves of the Dawn Redwood referred to as ‘a living fossil’. This is one of a group of three, prominently located at the southern edge of Two Mile Ash’s Local Park. This tree has a fascinating story to tell.

A Living Fossil, found in China

Until the 1940s it had been found only in fossil form, being once widespread across the northern hemisphere. The fossil record shows it as a dominant species in the period from the late Cretaceous to the Miocene era – from 90 million to some 5 million years ago, thus stretching back to the time of the dinosaurs. It was assumed then to have died out, perhaps through not being as competitive as other species.
But in the 1940s, the attention of Chinese foresters was drawn to an unusual tall deciduous tree in a remote part of eastern Sichuan. Careful detective work led these experts to the conclusion that the living tree in fact corresponded to the recently identified fossil, and that the species was in fact hanging on in this part of the world. Because the fossil resembled living sequoias (the redwoods) and because the living tree was superficially similar to the Chinese Swamp Cypress Glyptostrobus pensilis, the new discovery was named Metasequoia glyptostroboides.

Back to the USA

A professional collaboration then followed with Harvard University through which, in 1947, two kg of Dawn Redwood seed were collected and distributed to the University’s arboretum and to 600 institutions around the world. These included Hoyt Arboretum in Portland, Oregon which this author visited in October 2017. Portland has turned out to be a great place for the tree and in 1952 one of Hoyt’s Dawn Redwoods became the first in the Western Hemisphere to produce cones in about six million years! This success marked the start of continuing links with China whereby Hoyt enjoys botanical exchanges with the Lushan Botanical Garden in Jiangxi Province.

The Dawn Redwood that seeded first enjoys a special status at Hoyt as an Oregon and Portland Heritage Tree. When fully grown in that Arboretum it is expected to reach to some 140 feet which makes it substantially shorter than the other two redwoods which are native to California, the Giant Sequoia and Coast Redwood. Nevertheless, that is still a giant tree, when compared to any of our British native species. Another characteristic is that unlike the two taller redwoods, this is a deciduous conifer, shedding its leaves in the winter.

In England, the Dawn Redwood has frequently been planted as a ‘specimen tree’ in large gardens and parks. This follows on from the fashion of the 19th century for landowners to establish the Giant Sequoia (more commonly known in our country as the Wellingtonia).

As to the Two Mile Ash connection, our local environmental group TMAEG appears to have ‘rediscovered’ the Dawn Redwood in our ‘village area’. The species was clearly a component of the ‘set-piece’ landscape design – now 40 years old – for which our new town development corporation was responsible.

We are now in a time of acute austerity, an era in which the Councils now responsible plant hardly any trees and have few resources available for tree maintenance. Fortunately, our specimen Dawn Redwoods appear to like their home in Two Mile Ash where they have been growing fast. We cannot yet know whether they will achieve the heights forecast in Oregon but our rainy weather and the locally heavy soil appear to have suited them. All the same, faced with current climate change and other ecological threats these elegant trees need to be carefully treasured and protected so that as they grow to become the dominant trees of our area they can benefit future generations. 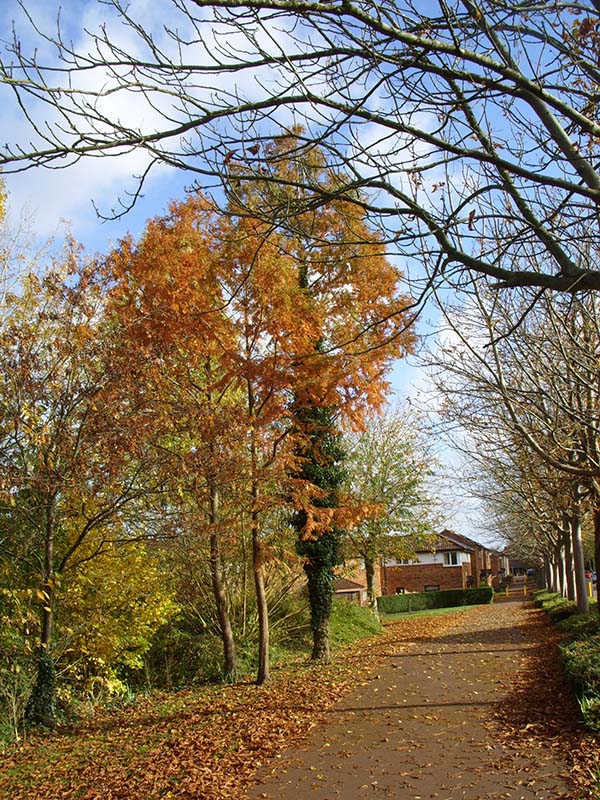 A group of Dawn Redwoods in their autumn colours close to the High Street entrance to the Local Park. 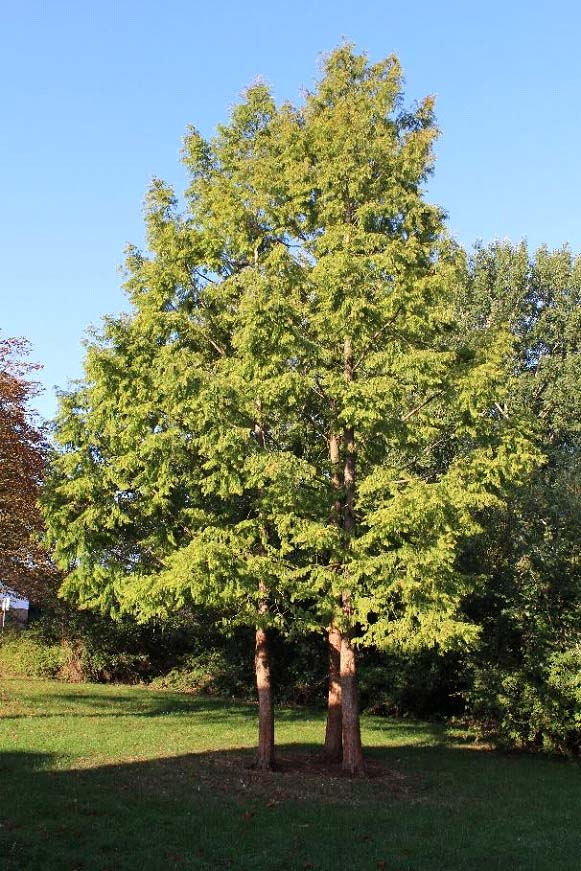