– Working with the Seasons 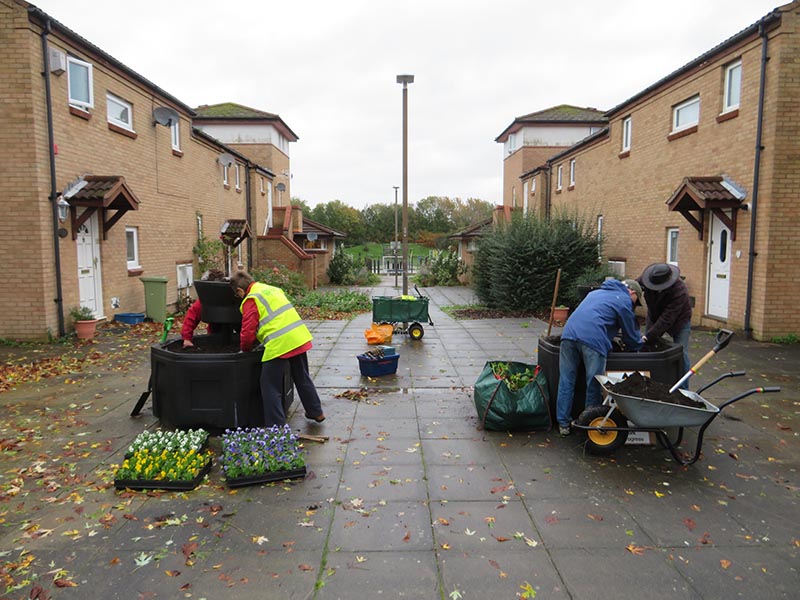 An annual event, the inter season changeover for the Park Gateway planters,  seen here in October 2019.

TMAEG maintains these two planters on behalf of the adjacent businesses which own them.  That gardening work continued during the Covid 19 Lockdowns with TMAEG volunteers closely following all the government and other health protection guidance. 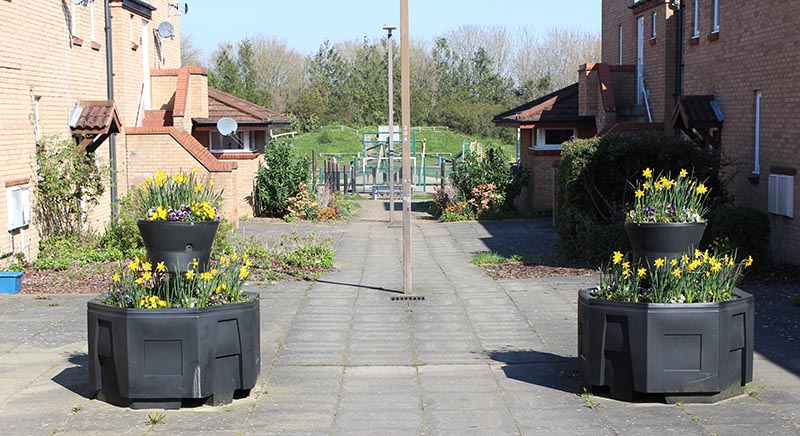 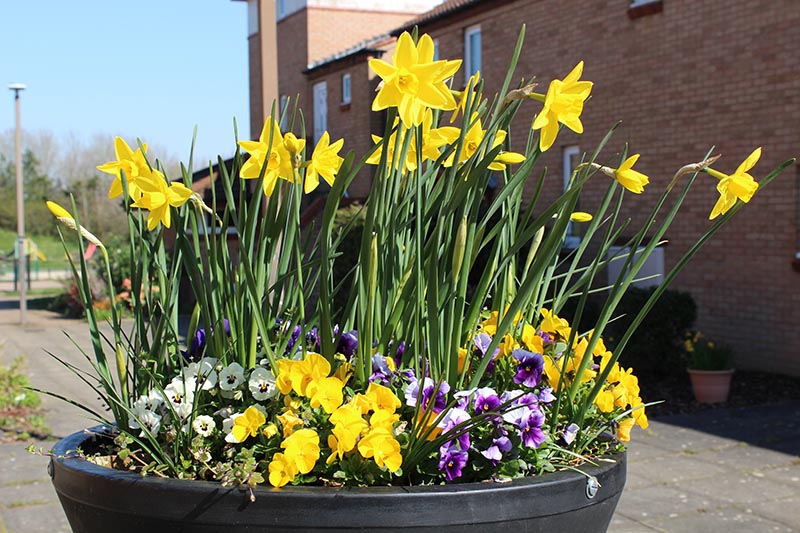 Close up of violas and emerging daffodils.

As shown in these two images, the winter/spring planting had a purple and yellow colour scheme.  This was achieved by planting Marie Curie daffodils and a mix of yellow/purple/white irises, crocus and violas. The spent bulbs and violas have all been replanted in our garden schemes. 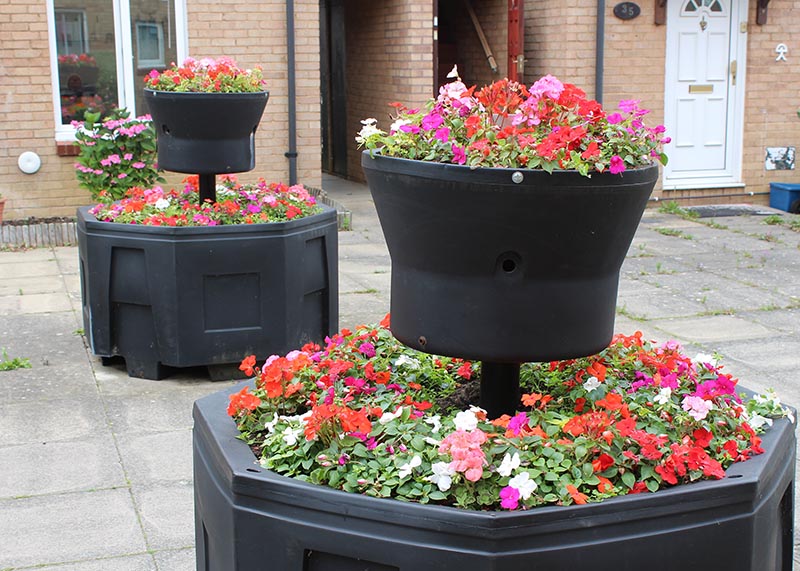 The planting for summer/autumn 2020

The summer planting was a mix of pelargoniums and Bizzy Lizzy in colours ranging from white through to dark red.  This is how they appeared in July but the display lasted well into October. 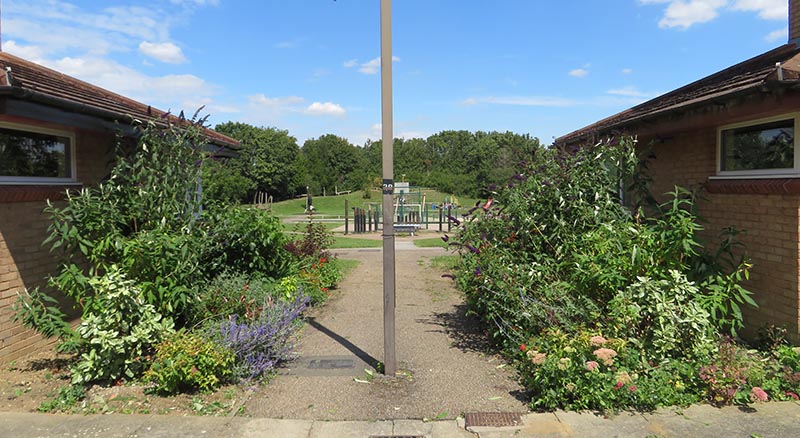 The Twin Gardens in July 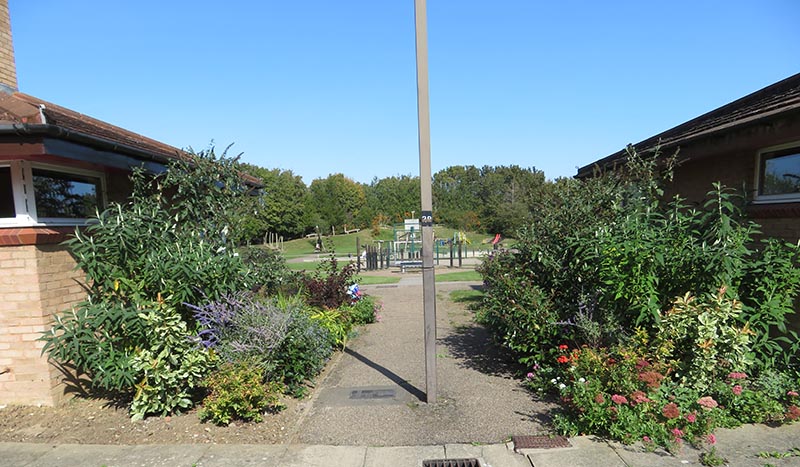 The Gardens in September

TMAEG has also been responsible for the construction and maintenance of the Twin Gardens at the entrance to the Local Park.  The two pictures above show those gardens in July (with the flowering of the purple Buddleia) and in September with the autumn plants in flower.

For Year 10,  TMAEG is proposing extensions to the Twin Gardens that will directly face the Local Park.  This prospect is being discussed with Milton Keynes Council.

TMAEG has continued its partnership with Ashbrook School in connection with the ‘three bulbs per child’ scheme for the new entrants to the school (see Section 3.3  and the maintenance of the planting tubs around the school frontages).  In respect of those tubs, committee member Anne has employed the same plants and colour schemes as those in place in the Park Gateway. 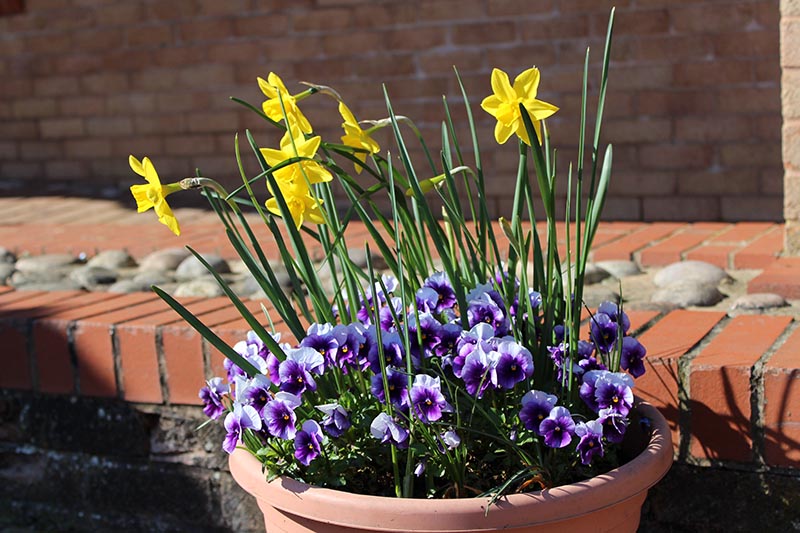 One of the 12 tubs with its winter/spring planting 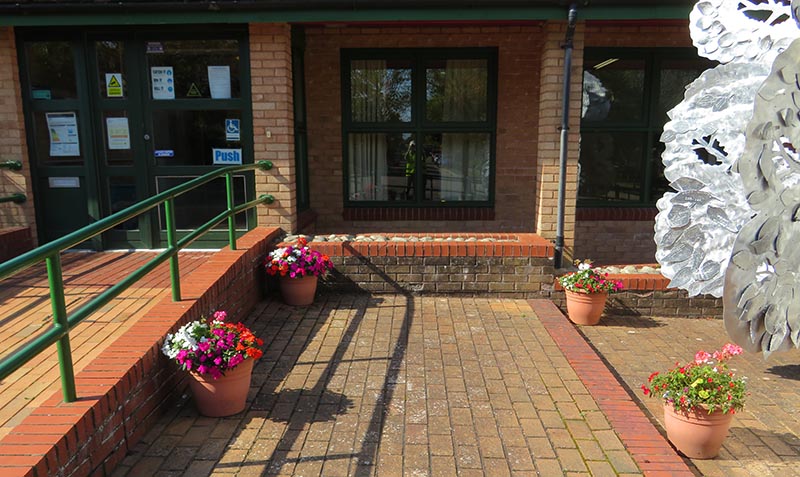 The School forecourt in September 2020 showing some of the summer planting. 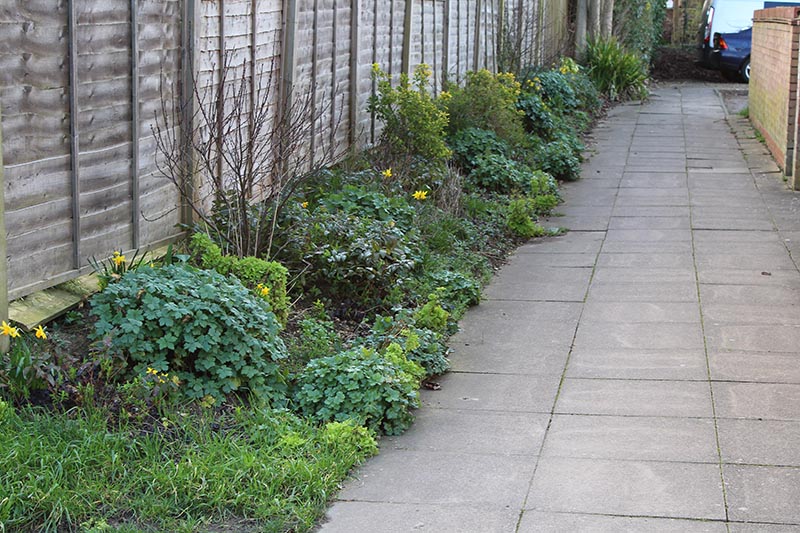 A view of our longest established community garden in Kepwick taken in February 2020 after a TMAEG makeover and just before the first Covid 19 Lockdown. 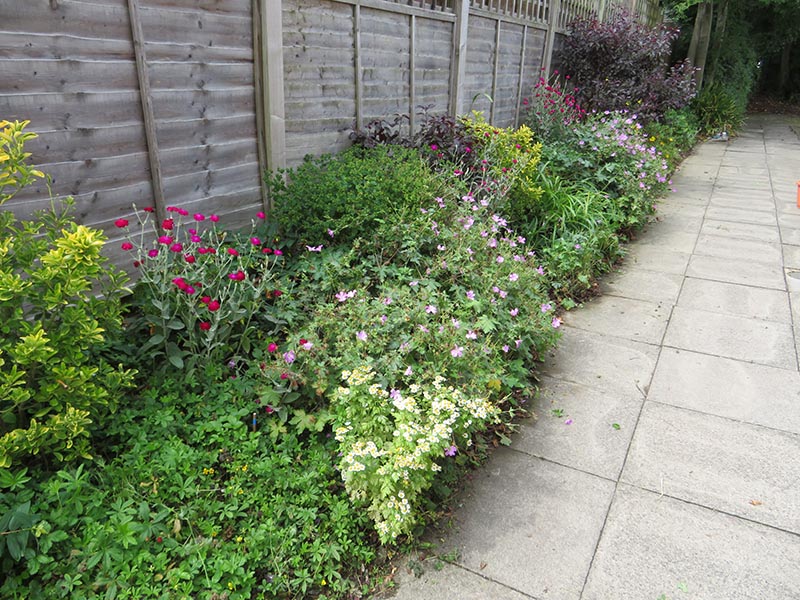 The same garden in July – it is very popular with local residents and users of this important pedestrian route. 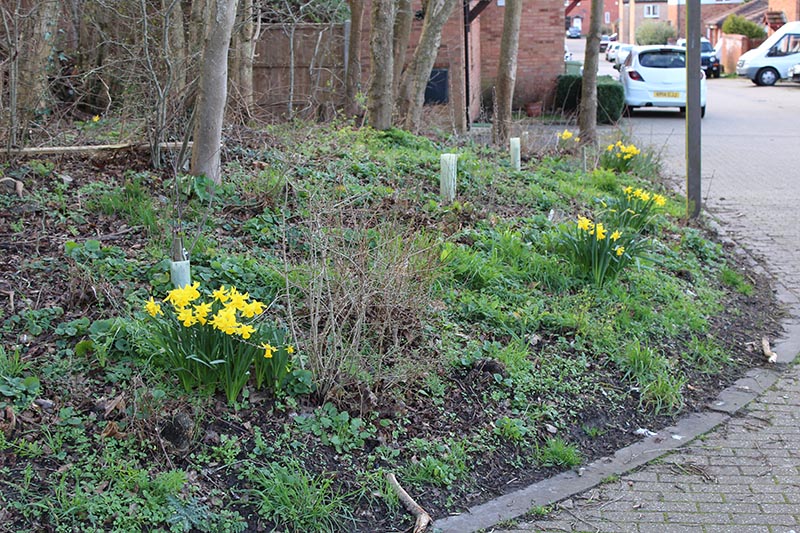 Further along that route,  TMAEG has planted many daffodils along the edge of the Kepwick Woodland, providing a striking feature in the spring.  (2020- 02-23   IMG 7576)   This area has recently been further enhanced by the reclaimed bulbs that have been planted in large groups beneath the trees. 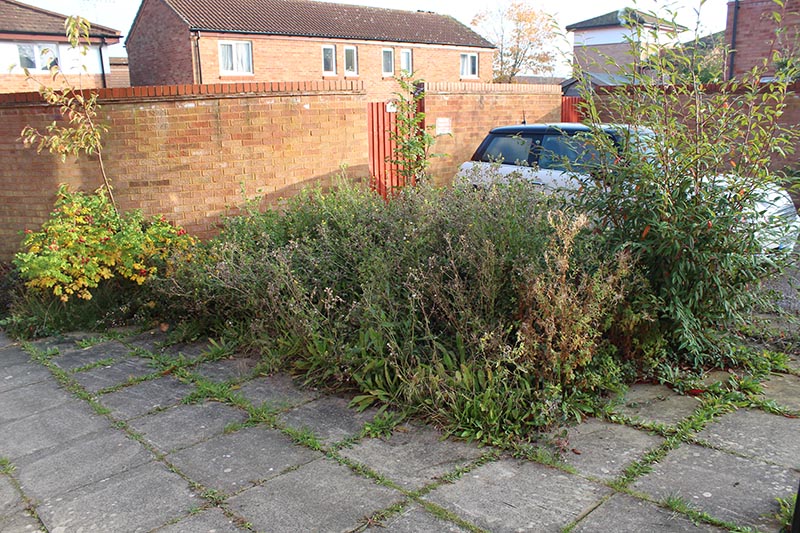 This Council owned site, close to the Two Mile Ash shops had been looked after by TMAEG for some years.  However, by autumn last year – the start of our Year Nine –  it had become clear that the previous ‘light touch’ maintenance wasn’t enough and that a total makeover was required (see above image).  In particular, the site had become badly infested by brambles.

The TMAEG Committee approved and allocated the necessary funds from our Plant Fund  and over a period of several months this area of 5m by 3m was transformed by a team of volunteers.  The planting involved a combination of structural shrubs including Elaeagnus, Choisya and a decorative Acer, perennial geraniums and hellebore, and ground cover of Periwinkle, Cyclamen, primulas and viola.  Reclaimed daffodil bulbs should also make a welcome appearance next Spring. The two photographs are of the main planting day in January and of Anne and Margaret who did much of the final work. 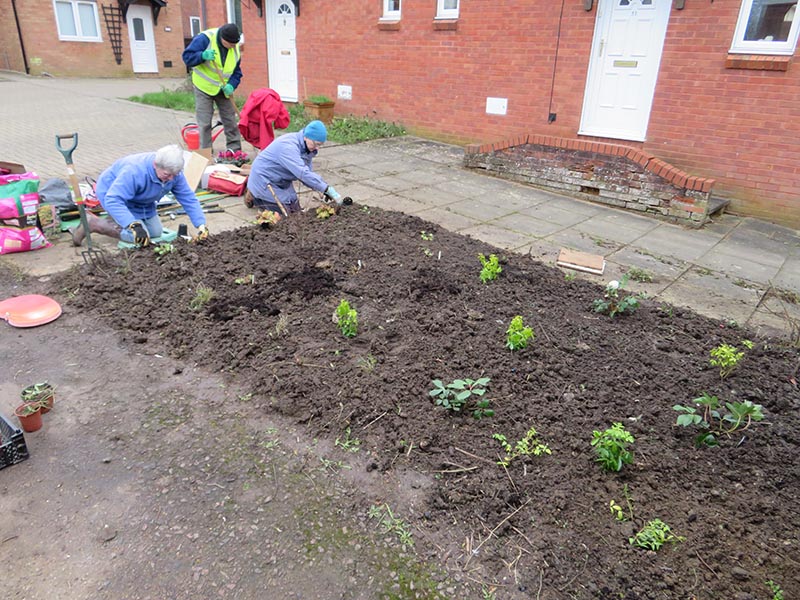 The main planting day in January. 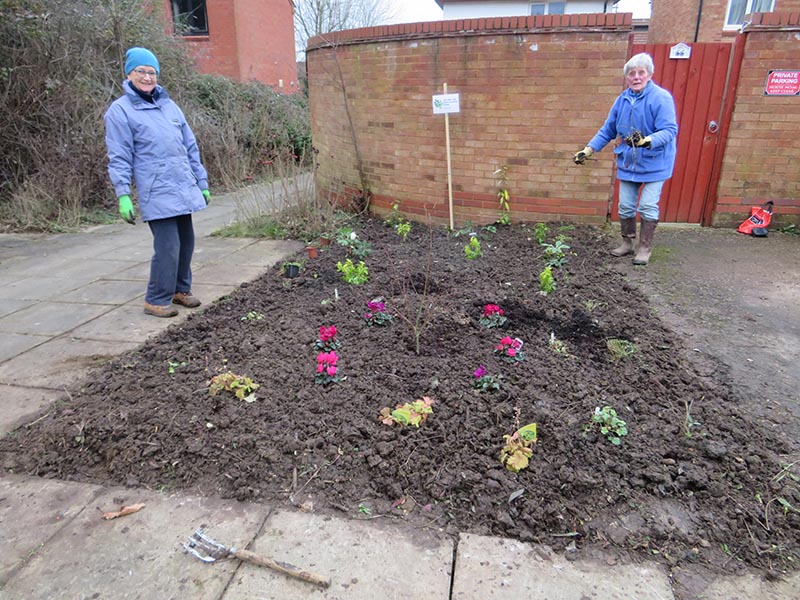 Anne and Margaret who did much of the final work. 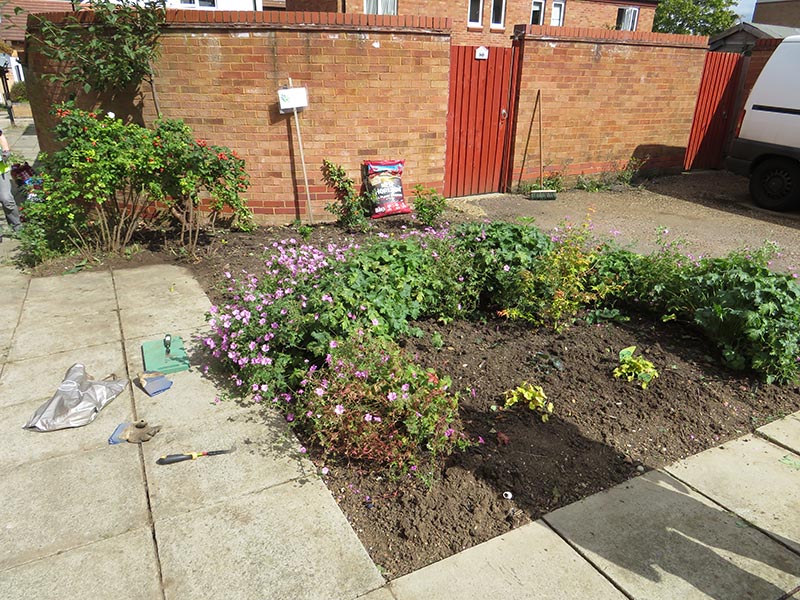 The garden after a maintenance session in September.

It can be seen that by September the plants are becoming well established but perseverance and patience are still needed!  From the feedback of local residents, who have helped with watering during the dry periods, this work is certainly appreciated.

A feature common to all of our environmental projects is the litter picking which takes place in conjunction with the other things that we do.  This work is organised by TMAEG member Mike Allen and we are grateful to him for his persistence over the years which has helped to keep our sites so relatively litter free.  We believe that because they appear so tidy, definitely less litter is being dropped.

In January 2020 TMAEG ran a special litter pick centred upon Kepwick and the connecting pedestrian route Capian Walk, leading to the H4 footbridge.  For this we made use of litter picking kits supplied by Milton Keynes Council under the Keep Britain Tidy Great British Spring Clean/ Parish Fund. 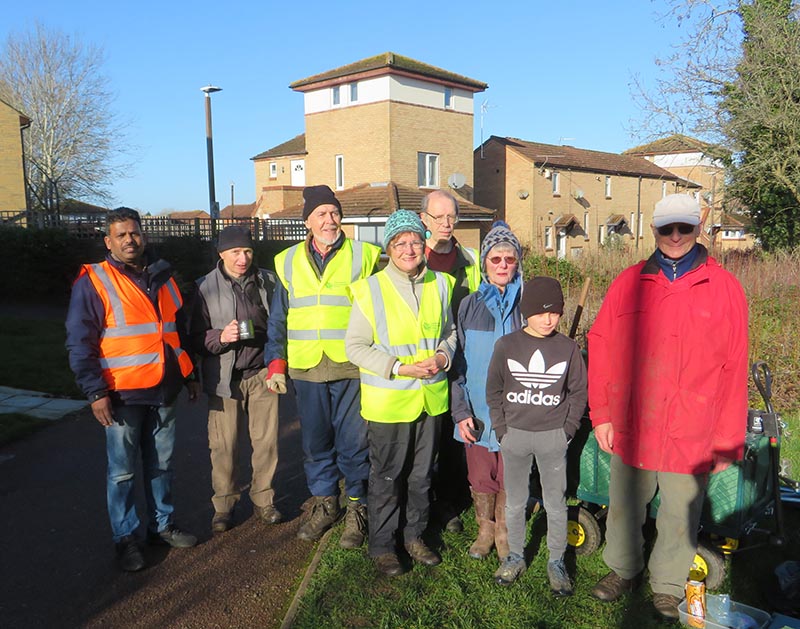 The litter picking team in Capian Walk,  together with a local lad who joined us for the photo.